If you’re a lover for the fast-paced life of a big city, Toronto is one place you’d never regret calling home. Toronto currently boasts a population of more than 6 million persons. Thanks to its bustling economy, it is Canada’s economic capital – a center for excellence in business and finance.

Toronto is highly recognized for its inclusiveness. The city is ranked highly amongst the top multiracial, multicultural cities in the world. Despite its teeming population, it was recognized in 2017 as the 4th safest city in the world, by The Economist’s Safe City Index.

About 52% of Toronto’s over 6 million population identify as a visible minority. In celebration and recognition of its multicultural diversity, a number of ethnic neighborhoods have been established across the city, from Chinatown to Koreatown, Little India, Little Italy, etc. 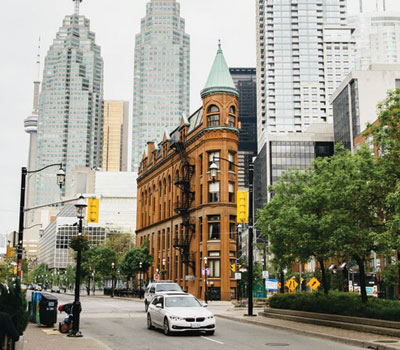 Landmarks and Recreation in Toronto

The city’s most iconic landmark is the CN Tower – a staggering 553 meters tall free-standing structure. It was the world’s tallest structure for more than 30 years! Right beside the CN Tower is yet another striking landmark: Rogers Center, home of Toronto Blue Jays. Toronto also hosts the Royal Ontario Museum, Canada’s largest museum with about 40 galleries of natural artifacts, historic and cultural relics and artworks, fine arts, dinosaurs, and more. Its sheer size and history-filled walls attract over a million visitors each year.

A green city, Toronto is serviced by more than 100 parks. The most popular – particularly during spring, and one of the largest of them all is High Park. You may also head off the beaten paths to Toronto Islands, a relaxing island park on the southside of the city that houses the Toronto City Airport. Or you may choose from a selection of parks with sporting facilities for both indoor and outdoor games. Giving its stature, it really is no surprise that residents of Toronto are treated to the very best of dining, shopping, and transit experiences.

Retail and Shopping in Toronto

Toronto is filled with lots of options to make for a wholesome shopping and dining experience. Amongst its most popular shopping centers are Eaton Center, Sherway Gardens, Best Buy, Yorkdale Mall, and Walmart. Hotspots for shopping and dining include Downtown, North York, Queen’s Street West, Bloor Street, and Etobicoke.

Transport in Toronto is serviced by one of the largest public transit systems across North America – the Toronto Transit Commission. With a slew of busses, streetcars, and subway lines, the public transit system ensures the city is very much accessible. Mobile App Taxi services that are operational within the city are Uber and Lyft. The highway leading out of Toronto is one of the busiest,  in the whole of North America, Highway 401.

Topnotch medical aid is available within the city, thanks to the presence of over 40 hospitals in the city of Toronto. While some of these hospitals are specialized – like Sickkids Hospital that serves only children, others such as Baycrest are more generalized in nature.

The Toronto real estate market currently has over 3,400 listings. This massively cosmopolitan city is not slowing its growth anytime soon, with investors and prospective homeowners alike welcome to tap into the vast potential the big cosmopolitan city affords everyone. The city is continuously listing new Pre-Construction Condos that are being built throughout Toronto.