Everything You Need to Know About the Vaughan Metropolitan Centre

From quaint multi-purpose office towers, urban squares and restaurants to open green spaces, pedestrian shopping areas and cycling paths, the Vaughan Metropolitan Centre (VMC) is a vibrant, modern location for residents and businesses. The VMC is one of the largest planned urban locations in Canada, complemented by first-rate urban amenities and a world class transit system – the centre is now fast becoming the heart of the City of Vaughan.

The rapid growth experienced in the city of Vaughan dating back to the 80s and 90s transformed the city from a small residential community into a vibrant city. This growth – which culminated in the development of the Vaughan Metropolitan Centre – has established the city as the go-to destination to live, work and invest.

Under the VMC Growth Plan, the city is expected to experience an 850% growth level in terms of people and jobs by the year 2031. This growth projection ranks it top out of all 25 urban growth centres in Ontario. New projects like the Festival Condos would help intending residents enjoy the urban lifestyle with upscale amenities, green spaces and close proximity to everything VMC has to offer.

Some of the centre’s exciting new additions will include:

Vaughan has become the premier destination for some of the biggest corporations, and home to thousands of new residents as it is the nexus between the Greater Toronto Region and downtown Toronto. It offers a unique blend of rapid and subway transit system, with easy access to surrounding areas.

Recreation and Entertainment in the VMC

Thanks to the opening of the YMCA which connects the subway station, the recreation and entertainment experience in the Vaughan Metropolitan Centre has gone up a notch. The tower is home to top-of-the-line amenities, including a large pool, youth zone, community rooms, conditioning room, gym, fitness studio, library, community kitchen arts studio, and not-for-profit childcare centres.

Urban spaces under development include the Central Park and Transit Square; these spaces will provide a backdrop for some of the most exciting events and festivals in Vaughan. The Edgeley Pond and Park – and 18-acre space – will display lush trails and natural landscapes, as well as walkways for pedestrians and bicycle trails. The park will be within a short walking distance of the mass transit system, allowing easy access to the centre’s major amenities.

Entertainment will also not be in short supply in the VMC. Restaurants and nightlife will light up the streets and create pedestrian mews throughout downtown Vaughan. In the meantime, the entertainment options nearby and across Vaughan – including Canada’s Wonderland, Kleinburg Village and the McMichael Canadian Art Collection – means it the goodness that is VMC is worth the wait.

What the Vaughan Metropolitan Centre Means for Investors

Traditionally, downtown Toronto used to be the destination of choice for most major corporations; this was understandable because the area was not only an economic hub of Ontario, but a powerhouse of Canada. However, the development of urban centres like the VMC has put the spotlight on Vaughan, and the reason for this is not far-fetched.

The VMC will feature festival condos, which include 18 condo buildings, 30 town home buildings and 300,000 sq. ft. of retail and office space. In addition to this, the increasing demand for residential condos in the VMC will appeal to result-oriented investors. It will also please investors to know that the VMC has already achieved well over 100% of its residential development targets for 2031. 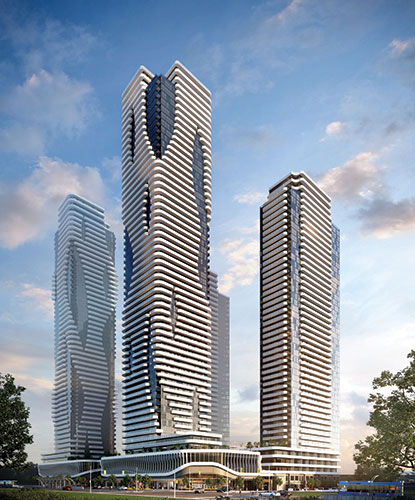 The Vaughan Metropolitan Centre will only strengthen the economic growth and population potential already underway throughout Vaughan. As the VMC continues to undergo massive development, the centre promises loads of opportunities for people and businesses to truly experience the attraction that is Vaughan.